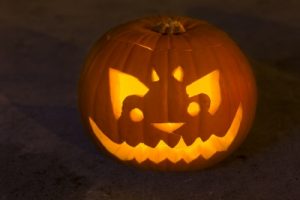 It’s almost the end of October and Halloween is creeping up on us, trick or treaters will be knocking on our doors and pumpkins will line streets up and down the country.

So to mark the occasion, we’ve thought about our favourite frightful films, the ones that scare us the most:

‘Halloween’: John Carpenter’s 1978 micro-budget slasher film reinvented the genre and terrified teenager babysitters around the world: although the killer: Michael Myers’ mask may seem simplistic and cheap, it effectively depicted an all too realistic scenario of an emotionally unstable young man returning home for revenge. The film spawned a line of sequels, and a remake was released in 2007, the quality of both those is debatable.

‘The Exorcist’: A film synonymous with the horror franchise, the story of a young girl possessed by a demon shook the foundations of cinema in the late 70’s with audiences screaming and running out of screenings, its use of religion and its vivid imagery still disturbs viewers to this day, throw in rumours that the cast and crew experienced paranormal phenomena on set, and the creepiness is taken to a new level!

‘Jaws’: Whilst not technically a horror film, this 1975 thriller about a killer shark stalking a swimmers near a seaside town has a gripping story and characters, is packed with suspense, scenes that make you jump, and a lasting impression: Try going swimming without hearing the iconic theme music in the back of your mind!

‘Threads’: Slightly more obscure than the previous films, this made-for-TV film from 1986 draws on the backdrop and fears of the Cold-War to tell a realistic, uncompromising, and harrowing (particularly if you live in Sheffield or South Yorkshire) depiction of a nuclear attack on the UK, which is an all too real threat, even to this day!

Thanks for reading our spooky blog, don’t have nightmares!